All patrons attending live events will be required to remain masked while inside the theatre. 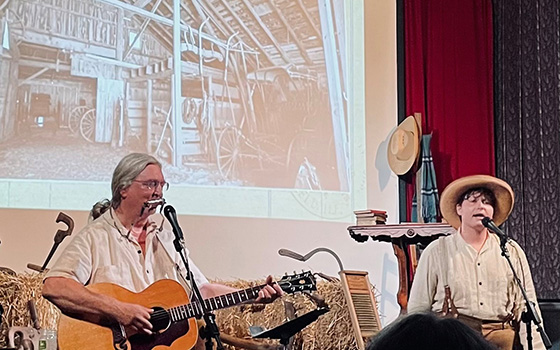 to benefit the Skokie Community Foundation.

When singer-songwriter Tom Irwin discovered an old book of handwritten notes in his family’s Central Illinois farmhouse, he had no idea where it would take him. The book was a diary, written in 1893 by Harry Glen Ludlam, a 16-year-old boy whose family sold the house to Tom’s great grandfather.

The diary brought Irwin back to a time of corn shucking, barn dances, and butternut picking. There were adventures—like visiting the World’s Columbian Exposition in Chicago—and a family crisis that forever changed Harry’s life.

Irwin began writing and performing songs based on the diary entries. In 2012, he collected the songs in an acclaimed recording, also called “Sangamon Songs.” This new musical, adapted by Skokie resident John W. Arden, takes the story to the next level, giving life to Harry and tying his experiences to those of Irwin’s, across the generations.

Come along on a musical journey through time with Tom Irwin and Harry Glen Ludlam. The production features Irwin as the narrator; John Gifford Irwin as Harry; Chicago musician John Rice, who has played in Steppenwolf Theater productions, will support the cast on banjo and dobro. Tom Thady will play guitar.

For more than 30 years, Tom Irwin has been a leading figure in the Central Illinois music scene, playing in solo acoustic settings, as part of a duo with Theresa O'Hare, and as the front man for Tom Irwin's Hayburners. In addition to "Sangamon Songs," he has released nine recordings of original material, including 2017's "All That Love," produced by John Stirratt of Wilco.