Since February, 2014, MadKap Productions has been the resident production company and management company for the Skokie Theatre.  They are dedicated to being the premier destination for live entertainment for both city and suburban residents.

In addition to booking Chicagoland's top singers, musicians, dancers and comedians, MadKap produces a four-play subscription series, plus many special events including the Skokie Idol competition and the Short Play Festival.

MadKap Productions was started in 2010 by producer Wendy Kaplan and director Wayne Mell.  They had each been working independently for many years, and met collaborating on a project.  They believed there was a need for quality regional theatre in the suburbs and began scouting for a home.

In 2012, they opened their first production under the MadKap banner at the Greenhouse Theatre in Chicago,  Mark Saltzman's Clutter: The True Story of the Colyer Brothers Who Never Threw Anything Out.  They became a resident company of the Greenhouse Theatre and produced several more plays at that venue, including Marc Jaffe's Side Effects May Include, a one-man show about Parkinson's Disease that went on national tour to raise funds for Shaking With Laughter and the Michael J. Fox Foundation.

But they never lost their dedication to the suburbs, and when the Skokie Theatre became available, they found the home they had been searching for. 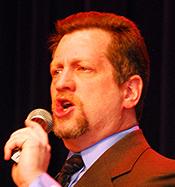