Older and Funnier Than Ever Before! 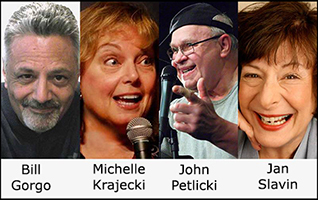 BILL GORGO (Busy and Tired) Bill's laid back style onstage and off and his continuing study of the comedy business makes him an extremely qualified authority on the subject of standup comedy. While performing standup remains his first love, he has written 3 plays and a television series, acted in half a dozen stage productions, is an award winning storyteller, has been active in talk radio, and conducted classes in the art of comedy, including the High Fiber Comedy Senior Stand Up Comedy classes at  the Skokie Theatre.

MICHELLE KRAJECKI (The Kid)is a staple of the Chicago comedy scene. You may have seen her at Zanies or The Laugh Factory. She was a finalist in the Clean Comedy Challenge at Hoosier Park Casino in Indiana and won the High Fiber Division of the Skokie Crown comedy contest in 2016. She's traveled all over the country performing comedy.

JAN SLAVIN (Big Time Producer) is a singer, stand up comic and writer who has appeared at the Chicago Women’s Funny Festival, Zanie’s, Laugh Factory, The Chicago Improv, The Comedy Shrine and many other great comedy venues. Jan is also a cabaret artist and has performed solo shows at Davenport’s in Chicago as well as with her Boomer Babes partner, Pam Peterson, in their recent hit show, Still Rockin! at the Skokie Theatre.