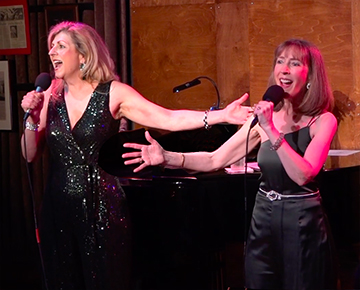 with musical direction by Beckie Menzie

Chicago cabaret artists Catherine Thomson and Anita Kallen are thrilled to be returning to the Skokie Theatre with a brand new “HERstory” show saluting the gutsy gals who boldly defied society’s conventions - going where no woman had gone before - and achieved groundbreaking female “Firsts.” With songs by Harold Arlen, Stephen Schwartz, Dolly Parton, Tom Lehrer, Kander & Ebb, and Sara Bareilles, among others, they share inspiring stories of amazing women and their trailblazing triumphs!

Anita Kallen and Catherine Thomson met in the summer of 2010, when they were among 38 students from around the world selected to attend the International Cabaret Conference at Yale University. Shortly thereafter, they launched their musical partnership with a successful two-woman show called Dangerous Women, a comic exploration of the many ways in which women can be dangerous. In 2018 with two other colleagues they formed a quartet and brought a sold-out celebration concert Bernstein at 100: Songs of Love and Longing to the Skokie Theatre. And in 2019, they premiered HERstory: The 19th Amendment Turns 100!, a celebration of the law that affirmed women’s right to vote. When the pandemic caused the cancellation of live performances, they filmed a digital version of the show at the Skokie Theatre, and streamed it to Skokie audiences and others around the country in 2020 and 2021. The success of that show has led to their new “Trailblazers” edition!

In addition to their work as a duo, Anita and Catherine have each developed and performed several successful solo shows. Catherine has been reviewed in Cabaret Scenes as “...a cabaret artist to watch. Not only does she sing like a canary and move like a cat, she gets the art of cabaret and thus is, above all, a wonderful story teller.” After Anita’s first solo show, Cabaret Scenes described her as, "rock solid vocally and confident interpretively which enables her to tell a heck of a story... Today's confident shimmery Kallen has become a real entertainer!"

What Audience Members Have Said:

“Fantastic show!! I loved learning about strong women and their journeys. Thank you for the music and laughs!”

“You get two women with TOP NOTCH performing skills and songs that will bring a laugh to your throat and a tear to your eye.”