In accordance with guidelines from the CDC, masks are strongly recommended but not required for patrons attending live events.  This policy may change as conditions evolve. 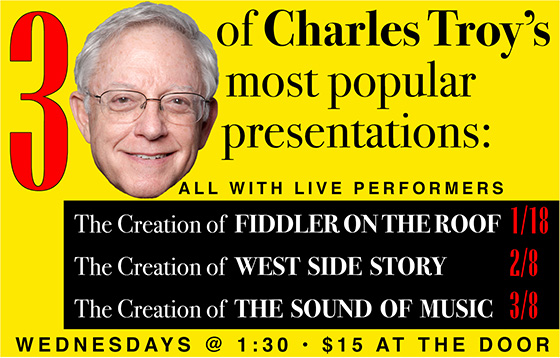 Once a month on

Jan 18 - The Creation of Fiddler On The Roof

The stories of Yiddish writer Shalom Aleichem seemed an unlikely subject for a musical, and certainly of limited appeal. We'll see how genius director-choreographer Jerome Robbins guided his creative team to find universality in the material, and how they made a "Jewish musical" that struck a responsive chord in virtually every country in the world.

Feb 8 - The Creation of West Side Story

This brave, brilliant musical tragedy, born into a world of musical comedy, took years to crystallize for its creators, then overcame daunting challenges just to get on stage.

Mar 8 - The Creation of The Sound of Music

Rodgers and Hammerstein’s last show -- written in 1959, the year before Hammerstein died -- was a distillation of many elements that were present in their four previous landmark musicals, and became, in the 1965 movie version, bigger than all the rest. We’ll discover the absurd way that Rodgers & Hammerstein became involved with the project -- and speculate how Hammerstein might have written the lyric to “Do-Re-Mi”!

Charles Troy, popular speaker and presenter, is an acclaimed musical theatre historian and graphic designer. He has created over 50 multi-media presentations and had presented his work to countless local and national audiences. His work has also been published in The Sondheim Review.