In accordance with recent guidelines from the CDC, masks are strongly recommended but not required for patrons attending live events.  This policy may change as conditions continue to evolve. 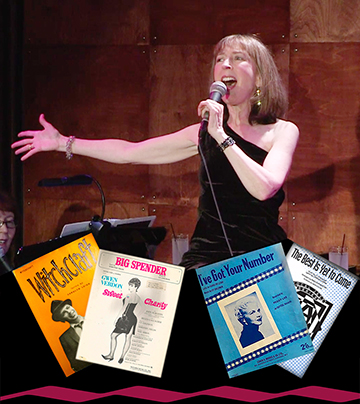 you know his music,
if not his name

If you've ever hummed along or tapped a foot to such memorable tunes as Witchcraft, Big Spender or I’ve Got Your Number, then you're already acquainted with a Cy Coleman melody, if not with the man himself.

Join Anita and Music Director Beckie Menzie as they salute the "unsung" musical genius of this Broadway and Billboard hit-maker. They’ll open the Coleman songbook, highlight some of his finest musical gems (and stories of his celebrity elbow-rubbing) and toast the “noteworthy” -- but not yet legendary -- Cy Coleman.

Anita is both a cabaret singer and theater actor. In the summer of 2010, she was one of 38 students from around the world selected to attend the International Cabaret Conference at Yale University and work with Broadway veterans like Faith Prince and Tovah Feldshuh, as well as cabaret legend Julie Wilson. Since then, Anita and Yale colleague Catherine Thomson have produced three successful two-woman shows: Dangerous Women, HERstory: The 19th Amendment and the Power of the Vote, and HERstory: Trailblazing Female Firsts.

Anita has also entertained audiences with her solo shows, including, That’s So Cliché! (But Music to My Ears). Cabaret Scenes magazine declared,“[Kallen] is rock solid vocally and confident interpretively which enables her to tell a heck of a story...[T]oday’s confident shimmery Kallen has become a real entertainer.”

Anita has also been active in Chicagoland theater with leading roles that have included Eliza Doolittle in My Fair Lady, Marian Paroo in The Music Man, Fiona in Brigadoon, Laurey Williams in Oklahoma, Irene Molloy in Hello Dolly, Joanne in Godspell, Mrs. George Bernard Shaw in MadKap’s Midwest Premiere of Mark Saltzman’s comedy, “Mr. Shaw Goes to Hollywood,”  and Blanche DuBois in A Streetcar Named Desire. Last January, MadKap audiences saw her in the streaming production of “Talking With….”

What Audience Members Have Said About the Show:

“It’s a honey of a show!” – Carla Gordon, Reviewer for Cabaret Scenes magazine

“Congratulations on a marvelous show! It was smart, well crafted, well-paced, beautifully sung and wonderfully delivered. Thank you for sharing Cy Coleman's story - my understanding of his music is so much richer.”

“You are so engaging and such a great storyteller. It was a beautiful performance! I so hope you have the opportunity to do this show again...we absolutely loved it!”

“It was a great tribute show!”

“Last night’s show was not only educational, but heartfelt and truly engaging….Whatever you do, you bring not only great professionalism to it, but more importantly, that thing called ‘heart.’”